Rasha Al Refaie was born and raised in Baalbek, Lebanon. A 29-year-old young woman living with her parents, sisters, and brothers. She works as a freelancer in the field of Media and Journalism, covering cases that concern children in specific. As a freelancer her income is relatively low, but she is able cover her own expenses. Rasha goal is to always find opportunities that can help her improve her skills in media and story pitching. Although Rasha’s community was affected after the Syrians settled in their community, they were able to accept that and gave support, “some local organizations focused on social cohesion, and provided several workshops on that matter for both the Syrians and Lebanese”, Rasha said.

Her interest towards covering major stories is the reason she applied for “Promoting Rights in Schools” training in Baalbek, Rasha said: “I was excited to part of such training, which revolves around children rights in schools, which is a concept that is underestimated and must be tackled”. Rasha was part of a training in ActionAid Community Center in Baalbek about “Promoting Rights in Schools”. The training included several practical activities, that introduced the participants to children rights in methods that includes group work.  “All the participants were from both the Syrian and Lebanese, but we during the training we were as one working in order to gain knowledge” Rasha said.

50 young men and women participated in the training, which aims to introduce youth on to children’s rights. In addition to the process of creating a survey that is designed to target children in 10 official schools in their community. The survey that the youth will lead will identify the children needs in schools.

Rasha hope in future that such trainings related to children rights will be added to school curriculum, “What I liked the most is the practical part after we finish the training, visiting the schools and talking to teachers and children about their needs, and how we can take that forward”, Rasha added. This training was reflected on Rasha personal life, she was able to identify the tools she can adapt while communicating with children.  The training that was conducted is part of the "Educational, economic and social development for Syrian and Lebanese youth" project that implements Entrepreneurial Trainings targeting 500 youth from refugee and host community. It is implemented by Action Aid Lebanon in partnership with Makhzoumi Foundation and in support of Justice Without Frontiers, that is giving a legal session in the training. 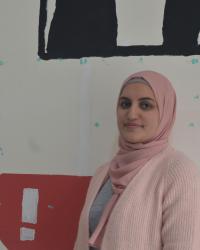